The web site was developed for The New York Metropolitan Chapter of the Victorian Society in America. It consisted of a searchable database (PHP/MySQL) of the unprotected cast-iron-fronted buildings in New York City along with background and historic information.  A survey of these buildings, which have not yet been designated either as individual landmarks or as part of a historic district by the New York City Landmarks Preservation Commission, was conducted in 2006 by architectural historian and Director of Columbia University’s Historic Preservation program Andrew S. Dolkart for the New York Metropolitan Chapter.

The survey and searchable database were initiated by the Metropolitan Chapter as a tribute to Margot Gayle’s pioneering work in cast iron architecture. 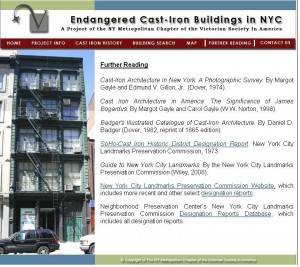